From a forum for beginners in Java:

What is the best way to improve logics. Since most of the coding works on developing quick/good logic. Is there a book or resource for developing logics which will be used in coding. Most of the times I end up speding time thinking abt the logics.How can one improve his logical thinking.

I don’t know of any book, method, or formal plans, but i’d simply suggest practice.

a lot of folks will tell you it’s GOOD to spend a lot of time thinking, and less time writing code. Abraham Lincoln allegedly once said “If i were given 8 hours to chop down a tree, i’d spend the first 7 hours sharpening my axe.” I think the same principle applies to coding – more time spent thinking about things up front will make writing the code much easier down the road.

We have had this concept hammered into our brains in my two classes in programming. It still hasn’t sunk in…….I still start thinking about code before logic. It doesn’t work……

Thank God they’ve found a name for it. Knowing the problem exists is a big part in taking steps……… NOT. For the past few years my wife has been, shall we say, concerned about my little problem. Frankly, at times, I’ve been a little worried myself. I couldn’t put my finger on the time when I noticed that my life had changed, and, like so many others, whatever it was, it came slowly, silently, until the realization dawned that I was different from the way I had been.

Let somebody else explain it……

When he hooked up volunteers to a brain-scanning machine, the preferred pictures were shown to generate much more brain activity than the unpreferred shots. While researchers don’t yet know what exactly these brain scans signify, a likely possibility involves increased production of the brain’s pleasure-enhancing neurotransmitters called opioids.

In other words, coming across what Dr. Biederman calls new and richly interpretable information triggers a chemical reaction that makes us feel good, which in turn causes us to seek out even more of it. The reverse is true as well: We want to avoid not getting those hits because, for one, we are so averse to boredom.

It is something we seem hard-wired to do, says Dr. Biederman. When you find new information, you get an opioid hit, and we are junkies for those. You might call us ‘infovores.’ “

For most of human history, there was little chance of overdosing on information, because any one day in the Olduvai Gorge was a lot like any other. Today, though, we can find in the course of a few hours online more information than our ancient ancestors could in their whole lives.

…. technology is playing a trick on us. We are programmed for scarcity and can’t dial back when something is abundant.

There, we can say it. I’m addicted to information. I need another hit of that opioid……

From our friends at Astronomy Picture of the Day:

Explanation: Our Earth is not at rest. The Earth moves around the Sun. The Sun orbits the center of the Milky Way Galaxy. The Milky Way Galaxy orbits in the Local Group of Galaxies. The Local Group falls toward the Virgo Cluster of Galaxies. But these speeds are less than the speed that all of these objects together move relative to the cosmic microwave background radiation (CMBR). In the above all-sky map from the COBE satellite, radiation in the Earth’s direction of motion appears blueshifted and hence hotter, while radiation on the opposite side of the sky is redshifted and colder. The map indicates that the Local Group moves at about 600 kilometers per second relative to this primordial radiation. This high speed was initially unexpected and its magnitude is still unexplained. Why are we moving so fast? What is out there?

Wonder if there is any connection between the radiation map and, say, this ancient symbol…..

Via Brits at Their Best:

Near this spot
are deposited the Remains of one
who possessed Beauty without Vanity,
Strength without Insolence,
Courage without Ferosity,
And all the virtues of Man without his Vices.
This praise, which would be unmeaning Flattery
if inscribed over human Ashes,
is but a just tribute to the Memory of
BOATSWAIN, a DOG,
who was born in Newfoundland May 1803
and died at Newstead Nov 18th 1808. When some proud Son of Man returns to Earth,
Unknown to Glory, but upheld by Birth,
The sculptor’s art exhausts the pomp of woe,
And storied urns record who rests below:
When all is done, upon the Tomb is seen,
Not what he was, but what he should have been.
But the poor Dog, in life the firmest friend,
The first to welcome, foremost to defend,
Whose honest heart is still his Masters own,
Who labours, fights, lives, breathes for him alone,
Unhonour’d falls, unnotic’d all his worth,
Deny’d in heaven the Soul he held on earth:
While man, vain insect! hopes to be forgiven,
And claims himself a sole exclusive heaven.
Oh man! thou feeble tenant of an hour,
Debas’d by slavery, or corrupt by power,
Who knows thee well, must quit thee with disgust,
Degraded mass of animated dust!
Thy love is lust, thy friendship all a cheat,
Thy tongue hypocrisy, thy heart deceit.
By nature vile, ennobled but by name,
Each kindred brute might bid thee blush for shame.
Ye! who behold perchance this simple urn,
Pass on, it honours none you wish to mourn.
To mark a friend’s remains these stones arise;
I never knew but one – and here he lies.

As a boy, I read every Horatio Hornblower book that has ever been published. So great was my addiction that I even read a reference book written about my hero: “The Life & Times of Horatio Hornblower”, by C. Northcote Parkinson, who, I quickly learned, way back then, was the father of the famous Parkinson’s Law. 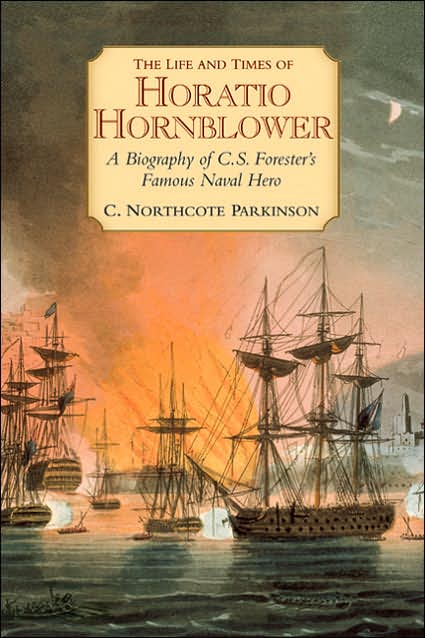 In my journey through life, I have never forgotten Hornblower, who overcame rejection, enduring tragedy, and persecution in a series of stories that surely must have provided some understanding about the life that lay in my murky future.

Parkinson’s law, one of the most profound, if little understood, principles of business, has, as well, been a frequent visitor in the cabin of my little ship of life.

The law may be succinctly stated thusly: “Work expands so as to fill the time available for its completion.”

Parkinson’s Law, at least as manifested in my existence, is often accompanied by that other famous natural law, Murphy’s Law, whose principle effect is summed up this way: “Whatever can go wrong will go wrong, and at the worst possible time, in the worst possible way.”

These two great forces have met, formed a vortex of immense power, and have begun sucking the faint essence of my soul-being from my physical existence. Let me explain……

It is spring break, so I have one week to catch up on domestic duties, school work, and to prepare for a large social function for an organization that takes this event very seriously.

On Sunday, the electrical components of our castle began to flicker. Televisions and computers were most severely affected. A call to the local utility, an astonishingly quick response, and the matter was taken care of, or so I thought. Within minutes of their departure, the terrible on-off cycle began again. We had no choice but to power down our two main connections to the world, television and internet.

On Monday, while feverishly completing school work on my computer, the utility company returned, to install a recording device to monitor the flow of electricity into and out of the crib. Flickering continued unabated. On Tuesday, work on the social function was partially completed, amidst truly alarming bangs and bumps as volts and amperage surged through our delicate devices. Wednesday dawned to the sound of more noises, with electrical devices that acted as if they had just left the set of Poltergeist. A call was placed to the electrician, who, agreeably, arrived within 30 minutes.

Yessir, he noted, you do have some problems. The only way to fix them is to track down the ‘gremlins’ in your wires. And so commenced the search, with every device that drinks electricity turned on, switches switched, and even additional consumers like very high powered lights brought in from the truck and turned on; all apparently designed to cause my home’s electrical system to fail. And fail it did not. But one thing did die, the one thing that I absolutely had to have this week in order to fulfill all of my responsibilities; the one thing that has become irreplacable (we all know that humans/employess are not irreplacable, but that’s another story)……yes, my desktop pc gave up the ghost.

Order has been restored to the grid. An even supply of juice is now available. But the one thing that really, really needs the juice is not here. It’s at the computer emergency room, where my new best friend is attempting to revive the exhausted, but vital component of my life. Like a family member in the waiting room, I await the visit from the doctor. What news will he bring?

If I require another computer, can he give me back the data that lives only on the old hard drive…..the hard drive that holds all of my software, data, and connections for school, work, and social obligation? Can I get a working device before the week is out, so as to finish my tasks before this eye of the hurricane (spring break) passes overhead and the furies recommence?

I await, helpless as a new born babe, the decision that will be rendered by those great natural jurists, Parkinson and Murphy.